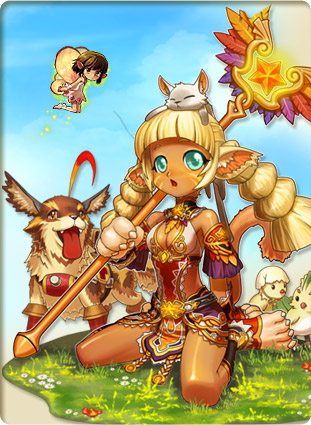 Once upon a time, the Holy Land of Lunatia was more peaceful than it had ever been. Harmony flowered throughout all the villages, and the land was always lush and fertile. The people were always cheerful and kind; melancholy was unknown to them. Furthermore, in Lunatia human emotions were controlled by seven gods, and the seven gods watched over this calmness in content. It seemed they were satisfied with the world and its people.

Eventually though, after observing the uneventful realm for a long time, Hemeroth, the God of Desire, who was known to be particularly bellicose, asked a question to all the other gods.

“What do you think? This world is peaceful and nothing really happens but the same old routine. If the peacefulness keeps up like this, humans and the land will start to devolve. I believe we should help humans go through a revolution. This will benefit them I believe…”

“Let’s give our power to humans then, and the fire of revolution will light up!”

“What you are saying will only corrupt humans in the end! What we must do is grant them chances and watch them. They have the right to make a future for themselves!”

The War of Gods

The disagreement of the gods went on and a conclusion was never made. In the end, both sides refused to hold back their opinion.
Eventually, the debate became a war to get the opposing side to surrender by force. However, there was an agreement that gods could never lay a fingers on each other due to “The Gods Pledge” that was made when the world was born.

Because of that, the gods decided to summon humans as their avatars. People in the town known as “Grows Gate”, which was the closest, were summoned for The War of Gods.

Summoned humans received unsurpassed powers and became referred to as "Nobles". Every Noble fought bravely for their respective god.

The Holy Land Lunatia started to lose the balance that previously existed because of the War of Gods and eventually caused collapse of the human world..

The god of the gods, the Divine God Gloria, who was in a deep sleep for a long time, sensed the coming collapse of the world, caused by the six gods. She awoke from her slumber and appeared as a sacred figure before the seven gods. Gloria immediately settled the unrest of the outrageous gods and then turned to Hemeroth, who was the source of the incident. Because of his argumentative behavior he was sealed by Gloria deep inside the ground for all eternity.

To prevent a similar occurrence from ever happening again, the Divine God Gloria divided the land in two and a river ran between them so that they could never be touched by each other. The two nations were made to be like twins, looking exactly the same but the characteristics of the humans who lived in each were completely different.

Gloria didn’t forget to take away the other god's powers either, and sealed them in the “Stone of Gods” so that peace could return to the world. The Nobles, whose strength also came from the power of the gods, was sealed within the Stone of Gods as well. In the middle of the night, Gloria then broke the “Stone of Gods” into thousands of pieces and scattered them all over the world.

From the land, the shards of the Stone of Gods were like bright snow falling all around the world and it was a beautiful and fantastic scene. This night has since been called the “Holy Night”. After the Holy Night, exhausted from having used all her energy to restore peace, Gloria fell back into a deep sleep.

As time went by, Nobles began to lose their memory, eventually even their name and where they were...