How to open the Skill Window

Shortcut Key (K) will pop out the Skill Window or click the Skill Icon on the Lower Menu.

All Players will automatically have one Basic Skill at Level 1.
Characters will obtain 1 Skill Point for every 1 Level starting from Level 2.

Learn About the Skill Window

If there's a remaining Skill Point, Players may upgrade their Skill by pressing the + button on the Skill Window. But, please be aware that the Skill Point will not be given back once it's been used!
The Skills that are connected down as a line are the Skills that require a Skill before being able to learn a new Skill.
There is a Level Limit to each Skill. Players must raise their Character to that level in order to raise the same Skill again.

When a Player uses the obtained Skill Reset Eraser, the Skills that have been learned will be reset and the Skill Points will be returned as a remaining Skill Point.

Detailed Skill Explanation Total (Detailed)
Players can view the Detailed Information of each Skill by placing the mouse on top of the Skill on either the Quick Slot or the Skill Window. 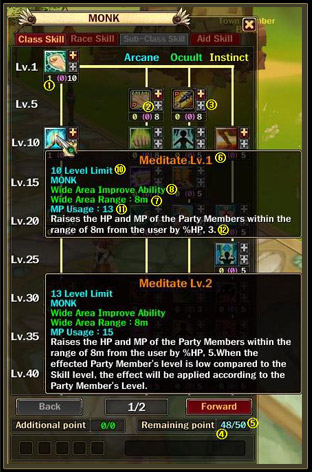 The Rules and Vocabulary for Skills : Skills will follow the Rules below.

Cool Down Time (Cool Time)
This is the stand by time to use the Skill again.

Casting Delay (Delay)
This is what we call "Casting". It's the delay time required for the Skill to activate.

Sometimes, a Skill will have a special effect.
These are called Skill Options, and are important for game play